I first learned of the story from whoiscraighunter.org.  The L.A. Times is reporting that the DA wrongfully fired an investigator who was investigating one of Rackauckas's pals. 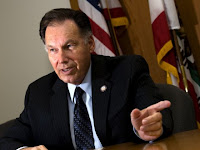 Here is the L.A. Times story:
O.C. detective wins back job after being fired for investigating political donor
April 8, 2010 4:11 pm
A veteran Orange County district attorney’s investigator who was fired after he refused to drop his probe into one of the district attorney’s close friends and political contributors has, for a second time, won back his job and will probably get more than $1 million in back pay.

Lyle Wilson was fired in 2002 for his handling of an investigation into the business dealings of Patrick Di Carlo, a wealthy Newport Beach businessman and supporter of Orange County Dist. Atty. Tony Rackauckas.


The firing brought criticism of Rackauckas early in his career as district attorney and led to an Orange County Grand Jury report that accused the district attorney of interfering in criminal investigations involving political contributors.


In an opinion filed Wednesday, appellate court Justice Eileen C. Moore wrote that the case “arises against a backdrop of political intrigue and purported cover-ups.”

The controversy started in 2000 after Wilson was assigned to investigate allegations that Di Carlo was the victim of extortion. Wilson and his supervisor subsequently shifted the investigation to Di Carlo for purported violations of federal and state securities laws.


Rackauckas later suspended Wilson and his supervisor and accused them of stealing evidence. He also accused Wilson of investigating Di Carlo, even after he was ordered off the case, and of talking about the case with the media.


In 2008, a Los Angeles Superior Court ruled that the district attorney erred when Wilson was fired for insubordination and ordered the firing vacated.


But rather than reinstate Wilson, county officials told Wilson the reason for his firing had been changed.


The move was an attempt to “game the system by backdating an amended discharge order and hoping it would fly,” Moore wrote in the opinion.


“It was a no-brainer,” said Corey Glave, Wilson’s attorney. “The county tried to play a game to do an end run around the court’s judgment without appealing it and it backfired.” 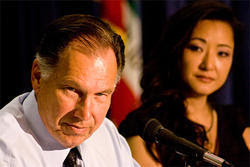 The district attorney’s office received the opinion on Thursday and was “exploring all legal options to decide what our next step is,” spokeswoman Susan Kang Schroeder said.