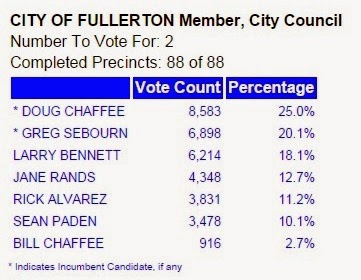 Thank you to Fullerton voters as well as my family, friends, and supporters who helped make this possible!

A Message from Sean Paden

I want you to know that the false attacks on Councilman Greg Sebourn by the allies of Larry Bennett and Doug Chaffee in a recent mailer are shamefully misleading.

The vote that the Fullerton police union claims Greg Sebourn made “against transparency” is completely false.

Here are the facts:  On June 17, 2014 Greg voted FOR transparency and it was Doug Chaffee, Larry Bennett’s ally on the City Council, who voted against it.

At issue is an ordinance called COIN. Two versions were proposed and Greg voted for one of them. The version Greg voted against exempted citizens’ oversight of labor negotiations of Fullerton’s police union.

Let that sink in a minute folks. The police unions just spent at least $15,000 on a direct mailer criticizing Greg for wanting their labor negotiations to occur out in the open – and they want you to believe that was a vote against transparency. Do not believe any of it.

Another deceptive attack was circulated in a scurrilous robo-call last week.  I have known Greg Sebourn for four years now and have attended almost all of the council meetings on which he has been a member. He is a man of good character and integrity and would never stoop to spreading the kind of falsehoods that are being spread about him.

Fullerton voters, please do not be fooled by these deceitful mailers and phone messages.

On Tuesday, November 4, please cast your vote FOR transparency in city government.