Here is the latest email blast "eCurrents" from MWDOC, the agency from which the City of Fullerton buys its water.


Message from the President
By Joan C. Finnegan, MWDOC Board President

It doesn't take a reader long to recognize that the Fullerton Observer is a heavily biased publication.

Each issue seems to surround Chevron, that "evil corporation that wants to destroy our beloved nature."  Some stories are emotional appeals while others raise valid concerns.


at least in my opinion, the Mid-April issue is rife with emotional appeals, two of which I would like to explore here.
First is the cover story with the flow chart. 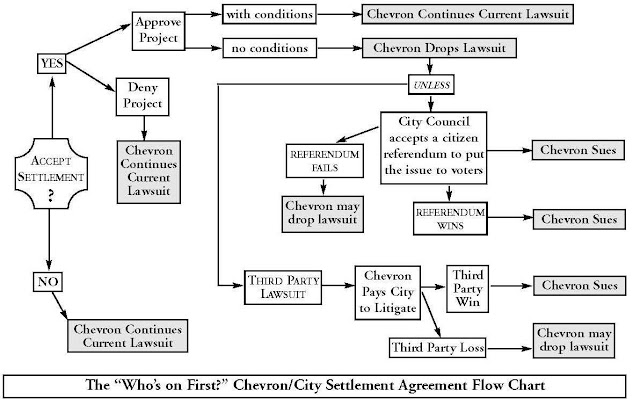 The big fallacy, or dare I say lie, in the chart is where the project is approved with or maybe without conditions.  The project as it stands has MILLIONS of dollars in conditions.  Those conditions will not go away and neither will the law suit if the City chooses to deny the project again.

There are many other issues with the story and the chart but I'll leave those alone for now.

Next, let's look at the letter from Shirley Gregg titled "A Myth On Steroids, Chevron's 'No Money'" on page 3 of the same issue.


The author says that Chevron has refused to work with OCTA this year and that the agency has earmarked Chevron as "unwilling to negotiate at this time."  She later states that Chevron has communicated with OCTA this year but rejected their offers.
You can stick your fingers in your ears, close your eyes and pretend it ain't so, BUT Chevron sent a letter dated March 22, 2010 to OCTA wherein PCH project manager Jim Pugliese outlines what needs to happen for the County or the City or anyone else to purchase the West Coyote Hills property.

"...the current allocation amount of about $27 million is not sufficient to acquire, restore and maintain our 510‐acre property even if it received 100 percent of the funding, which is unlikely considering the property is a habitat island and there are no existing wildlife movement corridors between it and other native habitat areas (e.g. Puente Hills, Chino Hills). It is also unlikely to receive all of the funding because there are over 100 projects competing for funding throughout Orange County.

The issue of liability is another concern. Acquisition would have to include satisfactory indemnification of Pacific Coast Homes for any future liability from future public use of the land. It is not clear OCTA is in a position to offer this guarantee.

Lastly, we have made a pledge to Fullerton residents that after project approval we would open West Coyote Hills for public enjoyment through miles of trails, vista points and a nature center. Based on our conversation, it does not appear that public access is a priority for your program, and we are not prepared to go back on the pledges we have made to the community." 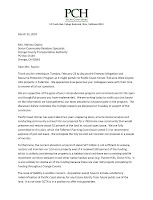 See actual letter at left.  Click images for full view.  To date, no one - OCTA, the City of Fullerton, or anyone else - has offered Chevron terms similar to those outlined in the March 2010 letter.
Ms. Gregg goes onto share her perceived deficit in parks in North Orange County.
The fact remains North Orange County has plenty of parks.  Just to name a few which are all NORTH of the 91FWY: 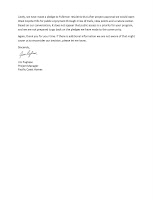 City of Fullerton's Proposed Budget Unveiled - $274.9-Million to be spent

The budget appears to be largely a rearrangement of the deck chairs with no real cuts proposed.  There are proposed cuts in certain projected spending to help make up for significant increases in employee benefits. 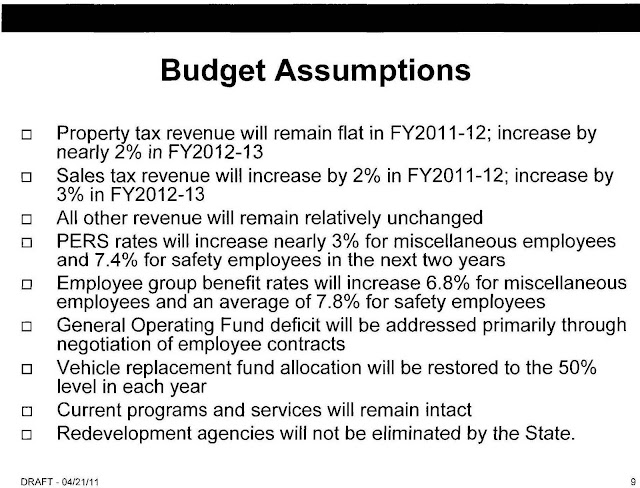 There were no explanations about the benefits increasing which Councilmember Whitaker took issue with.

Councilmember Quirk-Silva reminded staff that last year there were several ideas proposed for generating revenue and increasing fees such as the tow franchise which will be heard by the Council later this year.  Quirk-Silva expressed appreciation that the tow franchise was moving forward but would like to know about the other measure proposed last year.

One of my major concerns continues to be the infrastructure.  As Public Works Director Hoppe pointed out, we still have a nearly $150 million dollar paving deficit to deal with.  The current paving plan does not adequately address this nor does this proposed budget.  I hope the council members and City Manager Joe Felz will give serious consideration and address our infrastructure with this budget.

Below are the summaries for the proposed budget. (click on image to read)  The big question remaining in my mind is how does $274.9 million in taxpayer expenditures next year benefit my family, my neighborhood, and the quality of life in my community? 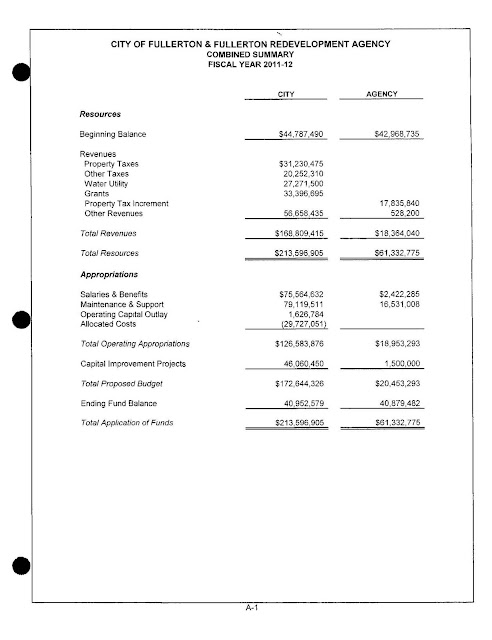 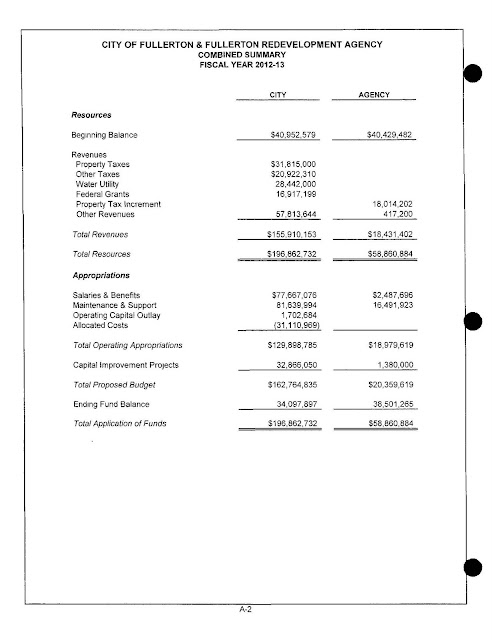 The City Official Who "Gets It" - Al Zelinka 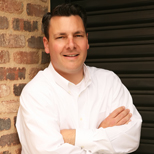 "Al Zelinka, is the community development director for the City of Fullerton, California. Prior to joining the City of Fullerton, Zelinka was vice president of RBF Consulting and served as principal of RBF Consulting's urban design studio. For the past 20 years, Zelinka has played an active part in more than 150 projects (20 of which have received awards) and has practiced planning and delivered presentations or training in more than 28 states (plus the District of Columbia). He is the coauthor of two APA publications, SafeScape and Placemaking on a Budget. Zelinka received a master of regional planning from Cornell University."

The Cornell grad is a shift from the usual bureaucratic appointments by an otherwise largely failed City Council.

Last night was the first time I felt that someone at City Hall "gets it".  Not that there aren't a few very talented folks down there but anyone who has had to develop a piece of property in Fullerton knows the frustration and expense associated with the process.

Speaking to the residents and selection committee at last night's DCCSP public meeting Zelinka said something that hit straight to the core of Fullerton's problem with private investment and development.  With about 30, maybe 40, people in the room, Zelinka said "We need to get government out of the way!"

Holy Hot Tamale!  That was my message during the 2010 City Council election!

Zelinka is the first to realize and, more importantly, vocalize that City Hall with its commissions and council is actually hindering growth, development, and investment.  For years, perhaps decades, Fullerton has been a difficult place for developers to work.  Between the NIMBYs (not-in-my-backyard), a disjointed development code, and a void of leadership few have been willing to invest here.

Zelinka went on to explain that the specific plan which is to be created by the public through various workshops will create a framework for expediting development.

The way it has been explained to me is like approving which Lego's you will allow to be used upfront and then, anyone using those Lego's gets a quick approval.  I realize that is overly simplified but the concept is the same.

Some of the public comments included a strong desire for NEW architecture.  I truly hope those with that or similar opinions and concerns stay engaged in this discussion so that we don't end up looking like Irvine with the same beige stucco facades that seem to be creeping into downtowns across the U.S.

I was not a fan of this project from the start, mostly over concerns of the costs to taxpayers for condemnation and the potential for suppressing property rights.

A major component of the plan is to address the roads and properties fronting certain arteries (corridors) leading into the Downtown "core".  This is where I see our tax dollars being invested first and foremost.  It is also where the largest segment of Fullerton's residents will be adversely affected if it isn't done right.  It will require YOUR input to make it a good plan that is uniquely Fullerton.

With Al Zelinka's clear vision of getting government out of the way, I am optimistic that he and other City regulators will know when (and how) to step aside and allow growth to take place without heavy handed tactics or the use (and abuse) of public funds.

Subdivision Map Act: A One Day Seminar Near You! 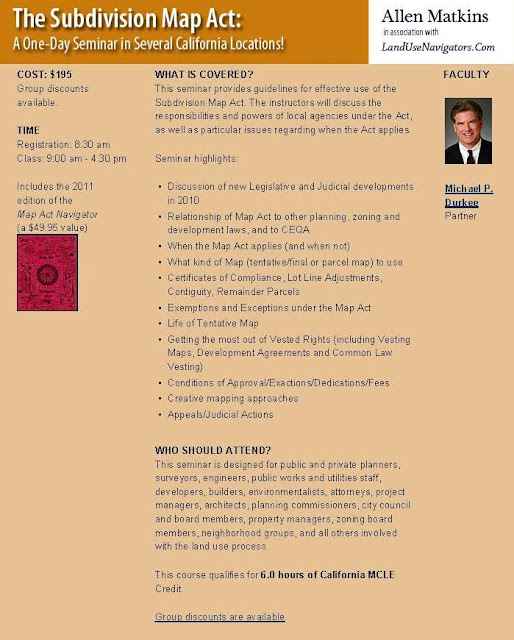 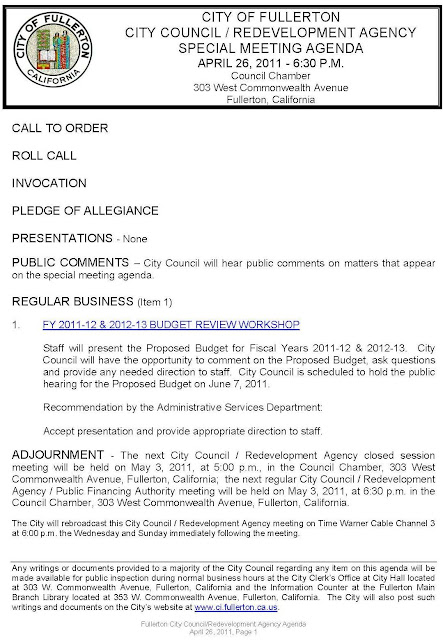 Tonight the future of Downtown Fullerton is in your hands...sort of 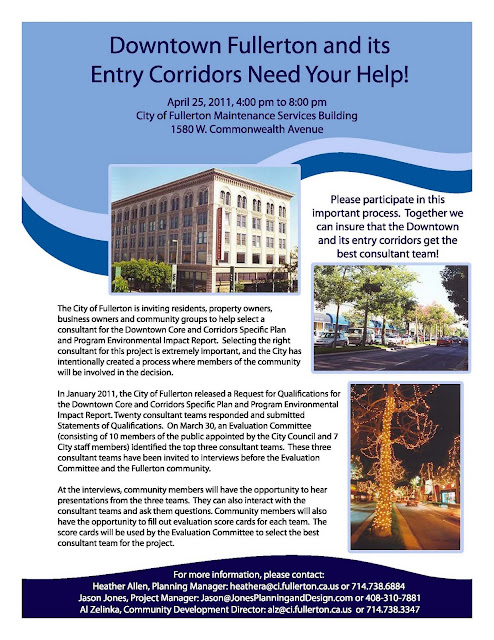 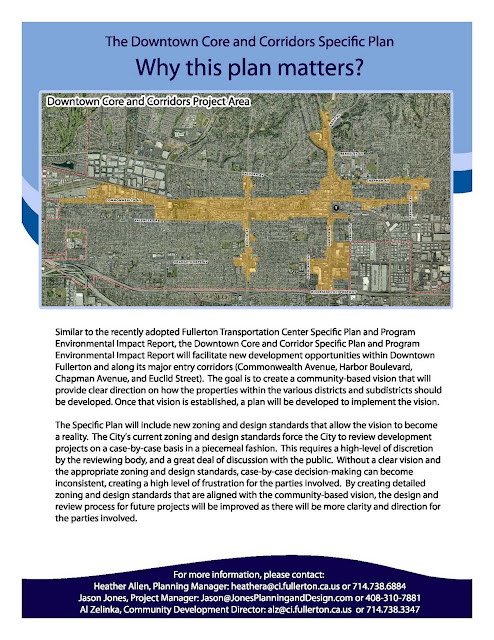