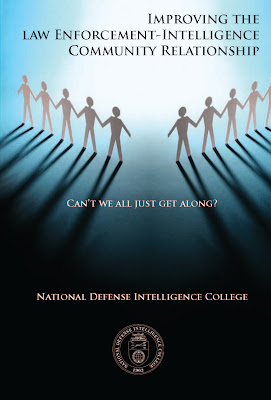 Not very well according to a new book out by the National Defense Intelligence College and made available through the National Technical Information Service.  The only thing more obscure than these two federal agencies which few outside the walls of federal institutions have ever heard of, might be this book.
Some in-the-know government agents have put their minds together to look at the way intelligences agencies interact.  Since 9/11 the intel community has struggled to work with one another and divulge information to law enforcement.
The book is a collage of essays and analysis of various operations around the world.
So, why bring up this book here and now?  For starters, the text on the cover, "CAN'T WE ALL JUST GET ALONG?"  Those words were spoken by Rodney King after surviving a beating by LAPD officers and the riots that ensued after the officers were acquitted.  King walked away with $3.8-million.
Now, in the aftermath of Kelly Thomas's death at the hands of several Fullerton Police officers, I'm wondering how well the Fullerton Police Department, the Orange County District Attorney's Office, the Federal Bureau of Investigations, and the City's hired consultant will share their intel with one another.
Maybe if the parties involve would just talk to one another, it would be a good start.  However, we are not hearing much of anything from anyone.  Are the Fullerton Officers at the scene on July 5th cooperating with ALL of the investigations?  Are the agencies sharing information with each other?  Are other "incidents" involving the FPD being investigated by the OCDA or FBI?
Lastly, something the book doesn't address is sharing information with the public.
Go ahead and keep us in the dark; we'll see how long that lasts!
by Greg Sebourn on Friday, August 19, 2011 No comments:

Fullerton PD, it will get worse before it gets better

Just when you think things couldn't get worse for the Fullerton Police Department more police corruption is uncovered.
Acting Police Chief Captain Hamilton has ordered an internal affairs investigation into the arrest of Veth Mam.  Mam is the person who recorded Fullerton Police officer Kenton Hampton approach him.  Hampton is then seen smacking the cell phone to the ground.  Someone picks up the phone and continues to record Hampton attack Mam and then arrest him.
According to the Orange County Register "(Hamilton) became very concerned because upon initial investigation, it appears we may have arrested the wrong guy that night," Goodrich said. "During our examination of the video, it appears that Mam was not the person who assaulted the first officer earlier in the video, but that's what the investigation is going to look into."
Welcome to Fullerton.

If the story involved the LAPD or LA County Sheriffs it wouldn't be much of an indicator of the department since those departments have several thousand officers.  If you have 10 bad cops, you still have a great department.
Fullerton is blessed (or cursed) with 144 officers, including those on leave.  A rough count of the officers that have been implicated in recent months in various allegations of police corruption while on and off duty, both proven and unproven, indicates that about 10% of the sworn personnel could be tainted in some way.
And just to put the numbers in perspective, 10% of the LAPD would equal about 1,000 of the nearly 10,000 officers employed.
Even if we cut the estimated percentage of Fullerton officers involved in some sort of misconduct to 5% of the department, it is still too high.
So, as the Fullerton PD tree is shaken even harder, how many more bad apples will fall?  Better yet, who will be left with their badge untarnished?  And most importantly, how high up the chain of command does the corruption run?  I hope recently hired consultant Michael Gennaco will be able to tell us sooner rather than later.
by Greg Sebourn on Thursday, August 18, 2011 No comments:

Illegal taxes and misappropriations? Give the man a raise! 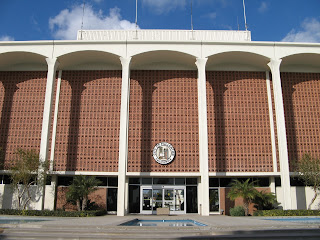 After putting a spot light on what the Howard Jarvis Taxpayer's Association has characterized as an illegal water tax and then discovering rampant misappropriations of earmarked funds, its frustrating to learn that City Manager Joe Felz is up for a raise.
According to the August 16, 2011 City Council agenda and associated staff report, Felz will get a salary of $201,000, for his salary, $41,000 for retirement costs, and $24,000 for benefits. It's not clear if the "benefits" include Felz's $625.00 per month car allowance.  Felz currently earns $166,250 per year.
Felz is the most approachable and humble city manager I have met but does that mean we should be giving him a MASSIVE raise in the midst of multiple crises?
Let’s recap.
We have an $8-million budget deficit which city staff says will be shored up through employee contract negotiation.  At this rate, are deficit will GROW, not shrink. It's not fair to ask other city employees to take huge pay cuts while the top dog gets a big raise.
The City has been applying an illegal tax on the Water Fund, siphoning nearly $3-million a year to cover salaries and benefits for public safety employees.
The current budget (with its deficit) shows that earmarked taxes for sewers and storm drain maintenance are being used to cover salaries and benefits in the fire department, community development, and human resources.
And then there is the most recent debacle, the complete mishandling of the death of Kelly Thomas at the hands of City employees.  Who knows how much this will cost Fullerton taxpayers...
I’m all for giving our new city manager time to right these many wrongs but I think pay should be based on actual performance and not intentions or platitudes.

Dear Joe,
If you want a raise, close the budget deficit, end the illegal “franchise tax” on water, end the practice of misappropriating public funds, and put a stop to police corruption.
You know the timing couldn't be worse and think about how this will reflect on the City of Fullerton.  Please do the right thing and reject the raise.

Is Redevelopment About to Expand?

It sure looks that way.

Among the Agenda items for Tuesday night's City Council meeting is Item #18, a MOU between the Cities of Fullerton, Buean Park, La Habra, Brea, Placentia, Yorba Linda, County of Orange, and the Orange County Workforce Investment Board is paving the way for a North Orange County Economic Development Partnership.

It looks like maybe this new agency could dodge some of Sacramento's pay-to-play redevelopment taxes recently enacted.

It also creates a much larger muscle for the redevelopment community to flex.  As it stands, three council members could end the Fullerton Redevelopment agency with a simple vote.  This new agency would be nearly impossible to dismantle once in place.

There is a bunch of fluff and superfluous wording that sells conservatives on a regional investment strategy.  And with Dick Jones, Don Bankhead, and Pat McKinley on the council, you can rest assured the MOU will pass.
by Greg Sebourn on Sunday, August 14, 2011 No comments: