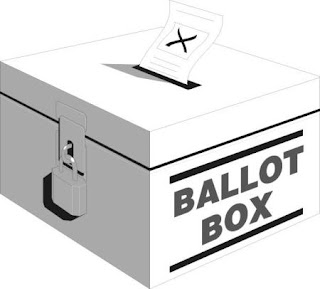 As you can see, there are still more than 19,000 ballots still out that need to find their way back to the OC Registrar of Voters.  According to the OC Registrar, Neal Kelley, his office has received record-breaking mail-in ballot returns to date.

October 26, 2010 - A truckload of ballots arrived at our Santa Ana facility today in what is one of the largest returns of vote-by-mail ballots in a gubernatorial election. 40,096 ballots arrived amid heavier than normal returns to date. We are working late into the evening to process, open and scan these ballots. Our plans call for all vote-by-mail ballots received by Monday afternoon to be processed for Tuesday´s results. And no, we don´t know the results - votes are not tallied until 8 p.m. on Election Night.

Help me get out the vote this weekend. Click HERE for details on how you can help!
by Greg Sebourn on Wednesday, October 27, 2010 2 comments:

Precinct Walks Scheduled for This Weekend - Rain or Shine 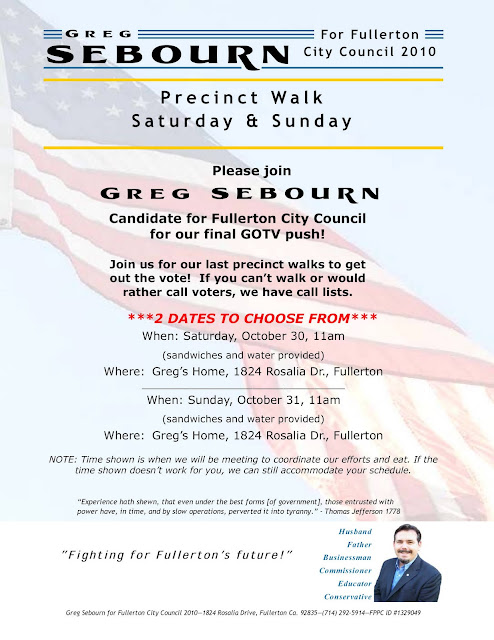 With 8 days left I am walking daily and talking with voters and concerned taxpayers.  Voters are fired up and tired of the business-as-usual attitude of City Hall.  Few are content with the direction the City of  is headed and most are upset that city "fees" (taxes) continue to rise while services are scaled back.  Taxpayers see this as civic mismanagement and they want accountability and transparency.

I have had a few calls from public employees interested hearing my ideas for pension reform.  Some are scared, some are embarrassed, but most are just concerned about their future.  And who can blame them considering the magnitude of the fiscal crisis.  Many retired firefighters have made it clear that the current pension formula just isn't right.  All of them said it was the nature of the work which attracted them to the fire service, not the pay or pension.  They each signed up because they wanted to serve their community and they enjoyed the hours.  Until recent years, they pay was not particularly high nor was the pension.  They point back to 9-11 as the definitive moment when public safety employees garnered major attention and support from taxpayers.  Everyone could see the dangerous work they do and they could justify the higher pay and generous pension formula.  But thankfully not every day is 9-11.  Each expressed that the job just isn't as dangerous as it used to be thanks to emerging technology, new building safety standards, and training. 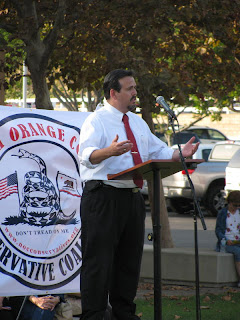 The campaign trail has been an amazing endeavor which, sadly, few will venture.  It is an expensive process if you hope to win which, unless you are wealthy, requires you to hold your hand out and ask for donations.  As I have repeatedly said, political campaigns are the most unworthy cause for anyone to donate to.  Often, your money would be better spent on supplies for the soup kitchen or investing in a food bank.  But in order for the common man or woman to run and win an election, it takes money and boots on the ground.  Despite being out spent 10:1 by other candidates who have received support from special interest groups, I have been able to run a strong campaign and have received tremendous support from residents, small business owners, family, and friends.

There are just 8 days left to get out the vote.  If you would like to walk with me, call voters, or make a donation, please contact me via my campaign website, www.GregSebourn.com.