From our family to yours! 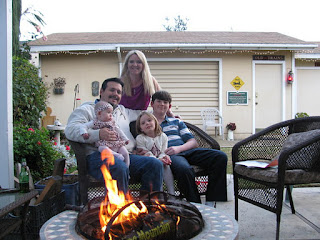 As much as I don't like corporate welfare programs, I think Councilwoman Melendez's idea is fair and reasonable.  Rather than limiting the tax relief to just new businesses or just those that are within certain districts, Melendez's program provides ALL Lake Elsinore businesses with small but meaningful incentives to continue operating and expanding with in the City.  Being a small business owner, she gets it!
Can Fullerton implement a similar program?
Here is a press release from her campaign for the State Assembly about her business tax relief measures:
Lake Elsinore Councilwoman Melissa Melendez
Successful In Drive to Provide Business Tax Relief

(Lake Elsinore, CA) – Lake Elsinore Councilwoman Melissa Melendez successfully introduced and passed several business tax relief measures to provide local businesses with much needed savings from taxes and fees Tuesday night.
These measures included:
ü Waiving the fee for business license renewal through January 31, 2012
ü Waiving the fee for a new business license through January 31, 2012
ü Waiving the fee for minor design review through January 31, 2012
ü Waiving the fee for a temporary banner/sign through December 21, 2011
“Californians have had enough of politicians who simply grandstand and self-promote, but never take a real stand to support the business community,” said Melissa Melendez.  “California has a jobs and economic crisis on its hands, and that requires action from elected officials, not hollow campaign promises and rhetoric.  I’ve stood consistently on the side of businesses and I will continue that stance in Sacramento.”
“I’ll work to implement similar measures that suspend job-killing taxes, fees, regulations and mandates in Sacramento,” continued Melendez. “Our Legislature must take substantive measures to relieve taxes and fees and encourage small businesses to grow and create desperately needed new jobs.”
Melissa Melendez is running for the 67th Assembly District.  She is proud to have the support of key leaders like State Senator Joel Anderson and Assemblyman Jeff Gorell.
Elected to the Lake Elsinore City Council in 2008, Melissa Melendez quickly earned a reputation as an articulate fiscal conservative and free-market advocate. As Mayor, she gained a national following after her 2010 guest appearance on Fox News Channel’s “On the Record with Greta Van Susteren.”
Melissa is a 10-year veteran of the United States Navy, where she achieved fluency in the Russian language at the Defense Language Institute, Monterey, CA, and then served as a Russian translator during the Cold War and Operations Desert Shield and Desert Storm. She is also one of the first women approved by the U.S. Navy to fly aboard EP-3E reconnaissance aircraft overseas to conduct intelligence-gathering operations in partnership with our allies.
After receiving an honorable discharge from the Navy, Melissa built a transcription company, contracting with the Chief of Naval Operations, and providing services to the Secretary of the Navy as well as other top-level Pentagon officials. She holds a Master’s degree in Business Administration (MBA).
Melissa Melendez’s commitment to the local community includes service on the Regional Conservation Agency Executive Board, the Lake Elsinore San Jacinto Watershed Authority (LESJWA) Board of Directors and the Boys & Girls Club local fundraising Board of Directors. She is a former PTA president, former homeowners’ association president, a member of the American Legion, a volunteer with Habitat for Humanity, and a volunteer youth soccer coach.
Melissa and Nico Melendez live in Lake Elsinore and are raising their five children. Nico is a United States Navy veteran and active reservist. He also works for the U.S. Department of Homeland Security.
by Greg Sebourn on Monday, November 21, 2011 3 comments:

FullertonTaskForce.info is an interactive virtual “town hall” website dedicated to soliciting ideas and feedback from the community about improving information sharing, services and resources related to the mentally ill and homeless in the community.
Al Zelinka, community development director for the city, said FullertonTaskForce.info provides residents, business people, students and other interested stakeholders with “a creative and convenient way to share ideas, provide feedback, and make recommendations on a broad variety of issues related to this outreach effort.
“This new public engagement platform allows a more diverse audience of participants that might not be able to attend conventional public meetings. Anyone interested in providing constructive ideas and solutions can simply jump on-line from work, home, school or wherever they have Internet access, and join in the discussion.”
The on-line forum will be used in conjunction with traditional public meetings to provide information to the task force.
“We are always looking for better ways to capture input and ideas from citizens,” said Rusty Kennedy, director of the Orange Cou8nty Human Relations Commission and task force chairman. “FullertonTaskForce.info is a great way to engage with people who cannot attend public meetings.”
Kennedy added, “This technology allows us to interface with hundreds of Fullerton residents and the public at-large. We appreciate that Fullerton residents have a strong desire to be involved in a constructive discussion regarding these issues in our community and this platform will allow us to better listen to citizens’ ideas and solutions.”
Further information about FullertonTaskForce.info may be obtained by calling Zelinka at (714) 738-3347, or Rob Ferrier, assistant to the city manager, at (714) 738-6760.
by Greg Sebourn on Monday, November 21, 2011 No comments: