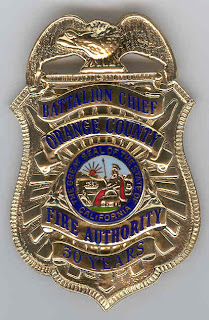 The front page of the September 9, 2010 Orange County Register brings to light how a good idea is implemented poorly.


The article discusses a report from an un-named source that shares data on response times from reserve firefighting and medical units in Orange County. According to the article, there are 495 reserve positions with only 291 positions filled. Of the 291 positions, 41 will be laid off or fired.

Let’s put it in perspective. The Orange County Fire Authority employs 841 full-time firefighters/fire management personnel. They have budgeted 495 reserves for FY2009-10. That means that nearly 1/3 of total first responder capabilities rest in the hands of reserves. Fullerton has no reserve firefighters to help shore up minimum staffing requirements and minimize overtime. For a department which was founded as a volunteer fire department I find it Ironic that they now have zero reserves on hand to help.

The OC Register article goes into the asset versus liability of having reserve fire units. Essentially, the report finds that several reserve units failed to respond to calls. That in and of itself is problematic but the real question that is missed is where has management been? You would think that management would notice pretty quickly that the reserves are not responding and then take corrective action. Apparently no one noticed. 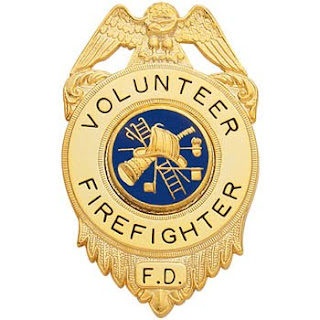 Amazingly, the solution is quite simple. By integrating reserves with professionals in the same manner as law enforcement agencies, the reserve can be better managed and will have the opportunity to receive peer mentoring.

Why has management allowed reserves to have their own volunteer units and not an integrated approach? My guess is that the OCFA union would not allow it through their MOU or no one cared enough to explore the use and utility of having reserves. For that matter, why do we still have firefighters being paid to sleep in regional firehouses? No other public agency outside of fire service, would allow employees to sleep on the job.

I realize the thought of working an 8- or 12-hour shift might terrorize some firefighters but it would certainly make better sense than having dozens of high-paid public servants sleeping on the job. Other communities have already implemented 8-hour shifts. It would also address the argument that firefighters deserve their high pay and pension because they are away from their family more than other public employees. With that argument one would think our soldiers are millionaires considering the time they spend away from their families.

Firefighting has its own culture based largely on tradition. When those traditions negatively affect taxpayers, it is time to think if we want to continue down this costly “traditional” road or cut a brave new path that leads to improved services and lower costs.
by Greg Sebourn on Friday, September 10, 2010 No comments:

Workers in government received an average $39.74 an hour in wages and benefits in June compared to $27.64 an hour for private sector employees, the Bureau of Labor Statistics reported today. 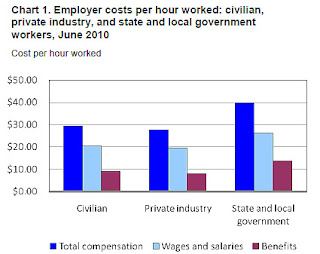