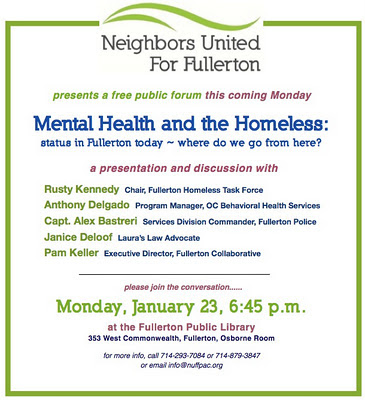 Moments ago the Fullerton Recall team turned in well over 50,000 signatures from Fullerton voters to initiate a recall election of councilmembers Don Bankhead, Dick Jones and Pat McKinley. The reason? Their simple failure to provide competent leadership for our city.
The individual totals are:
Next, the city clerk will...CLICK HERE TO CONTINUE
by Greg Sebourn on Thursday, January 19, 2012 No comments:

Email ThisBlogThis!Share to TwitterShare to FacebookShare to Pinterest
Labels: City of Fullerton, Culture of Corruption, Friends For Fullerton's Future, Recall

Acting Fullerton Police Chief Dan Hughes is asking for the public's help in identifying a vandal caught on camera.

The video is of a person committing a vandalism to a business in the 1100 block of  West Orangethorpe that detectives have been unable to identify.

"I am hopeful," says Acting Chief Hughes "that someone from your neighborhood [West Fullerton] will be able to identify him and contact Detective Jim Bolden at 714-738-6757."
Hughes says that detectives recently obtained and served a search warrant for a residence in West Fullerton after obtaining probable cause to believe the resident was involved in many acts of graffiti in the area.  The suspect in this case is currently a juvenile but Acting Chief Hughes says the juvenile will be prosecuted as an adult if arrested again within a few months.
The photographs below depict some of the graffiti instruments detectives discovered during the execution of the search warrant. 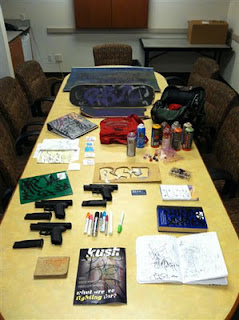 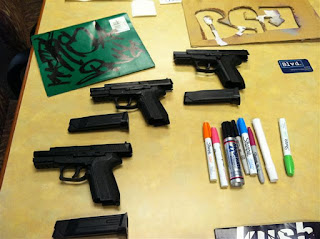 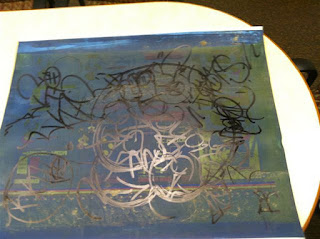 To report ANY crime in progress, including vandalism, call 911.  If you have information that may help investigators, please contact Detective Jim Bolden at 714-738-6757.

Due to a conflict in meeting locations, Fullerton Community Development Director Al Zelinka has rescheduled the site for his Thursday, Jan. 26, “Community Dialogue” public outreach program.
The new location for the January “dialogue” is the Fullerton Public Library Conference Center, 353 W. Commonwealth Ave. The meeting will run from 8-9 a.m.
The dialogues are designed to provide citizens an opportunity to discuss issues, concerns and hopes they have regarding the city’s growth and development. Zelinka started the dialogues as a means of helping his department meet the goals of its mission statement.

I encourage all Fullerton area residents and business owners to attend this meeting.  It gives everyone a chance to ask questions and make suggestions in an informal and friendly environment.

Past meetings have lead to stepped up police and code enforcement as well as neighborhood-level problem solving.

I have found these meetings to be much more productive than City Council meetings.
by Greg Sebourn on Thursday, January 19, 2012 No comments:

"For decades, the surviving families of policyholders have been cheated by life insurance companies who either knew or should have known that payout was due," said Chiang. "I will continue to work with the industry to improve their practices, but I reserve the right to use the full force of my office – including litigation – to compel insurance companies to follow the law and take care of life insurance beneficiaries."

The Controller took the lead in negotiating the settlement, which 18 other states subsequently joined.  Chiang reached a similar agreement with insurer John Hancock in April 2011.

Both settlements stem from a 21-company audit Controller Chiang initiated in 2008 to determine the insurance industry's compliance with state unclaimed property laws.  Administered by the Controller, the California unclaimed property program generally provides that businesses must send lost or abandoned financial accounts to the State after three years of inactivity in order to safeguard private property from being lost during mergers or bankruptcies, drawn down by service or storage fees, or simply used by private interests.

The audit revealed an industry-wide practice of companies failing to pay death benefits to the beneficiaries of life insurance policies.  Instead, companies would draw-down the policies' cash reserves in order to continue collecting premium payments from the deceased.  Once the cash reserves were depleted, the company would cancel the policy.  The audits also found that insurers did not routinely cross-check the owners of dormant accounts with the Social Security Administration's Death Master File and other government databases listing deceased individuals.  In other cases, the company had direct knowledge of the death of a policy owner, but still did not notify the beneficiaries.

So far, more than 1,000 Prudential policies have been identified as being held for individuals in who have been dead for more than 15 years.  The average cash value of the policies is about $2,000.

Today’s settlement requires Prudential Financial Inc., and its predecessors and subsidiaries (Prudential Insurance Company of America, Pruco Life Insurance Company, Pruco Life Insurance Company of New Jersey, Prudential Retirement Insurance and Annuity Company, and Prudential Annuities Life Assurance Corporation, formerly known as America Skandia Life Assurance Corporation) to do the following:
·       Restore the full value of impacted accounts;
·       Fully comply with ’s unclaimed property laws and cooperate with the Controller's efforts to reunite millions of dollars in death benefits and matured annuities with their owners or, in many cases, the owners' heirs;
·       Pay the beneficiaries three percent compounded interest on the value of the held amounts from the date of the owner’s death or January 1, 1995, whichever is later.
Other states signing the settlement are: , , , , , , , , , , , , , , , , and .
by Greg Sebourn on Tuesday, January 17, 2012 No comments: