The attack was reported around 1:15 p.m. at the Pinetree Apartments at 1501 S. Highland Avenue near Orangethorpe Avenue, said Sgt. Fred Casas of the Fullerton Police Department.

The initial investigation revealed a man forced his way into an apartment and raped the victim at knifepoint, Casas said.

A perimeter has been set up around the area.

The attacker is described as Latino, in his 40s, with short black hair and a mustache. He was wearing a brown winter jacket with blue jeans, Casas said.

From the Associated Press: 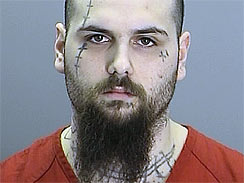 Is this a joke? You have got to be kidding, right?  Nope, it's for real!  I hope Judge Michael Andrews gets thrown off the bench, how ever that has to happen in Flori-DUH!!
by Greg Sebourn on Wednesday, December 09, 2009 1 comment:

It was a warm summer evening...