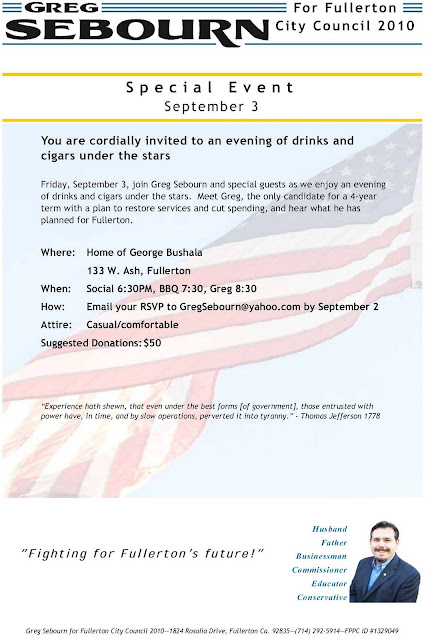 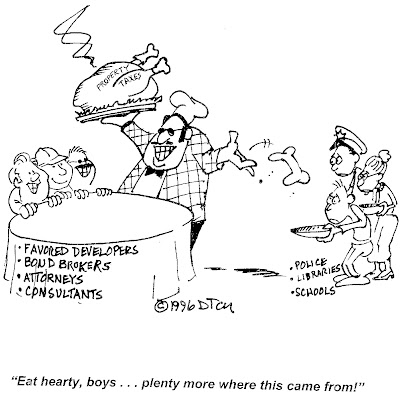 "It’s always entertaining watching various tax consumers fight with one another over a shrinking revenue pie, which makes the Proposition 22 campaign a spectacle. Despite the chatter from supporters about “saving local services” and stopping Sacramento from “raiding” local treasuries, this November initiative simply pits different government groups against each other to save their resources.


The main beneficiaries if the initiative passes: developers who receive tax subsidies to build their so-called “redevelopment” projects and bureaucrats who like to micromanage land use in their cities. This one is an easy “no” vote for any number of reasons.


Prop. 22, the Local Taxpayer, Public Safety and Transportation Protection Act, “prohibits the state, even during a period of severe fiscal hardship, from delaying the distribution of tax revenues for transportation, redevelopment or local government projects and services,” according to the attorney general’s ballot description. In simple English, the measure would stop the state government from diverting money from redevelopment and transportation agencies to the general fund – no matter what disastrous fiscal mess the state finds itself in.


Both sides are trying to depict themselves as advocates of some sacred principle such as local control, but this is nothing more than various groups fighting to preserve their budgets by throwing other budgets overboard. Keep that in mind as you sort through all the campaign mailers that will soon be coming your way. Virtually all these government groups would love to simply raise everyone’s taxes to preserve their programs and pensions – but in this case they are fighting each other rather than ganging up to fleece taxpayers.


Basically, transit, redevelopment and city officials are on the side of Prop. 22, and education, health care and county officials are against it. In this case, the former are making the real raid on the treasury, while the latter are trying to thwart the raid. In this case, I side with the latter, even though I can’t ever recall being on the same side as the firefighters’ and teachers’ unions.


The primary supporters and beneficiaries of Prop. 22 are defenders of an outmoded and failed central planning system known as “redevelopment.” Redevelopment for decades has promised to redevelop blighted cities. But, as the public has learned after the U.S. Supreme Court’s Kelo decision in 2005, cities routinely abuse eminent domain on behalf of big developers who turn to these agencies to acquire Other People’s Property for them on the cheap. Cities are eager for the sales taxes that malls, auto dealerships and big-box stores bring, so they do everything they can to lure these developers.


Recently, the courts have upheld the state government’s raid of these dollars – and that’s a good thing. Because central planning is a failure anywhere it’s tried, redevelopment has a spotty record in actually improving things in cities. More realistically, the agencies create ever-expanding redevelopment plans with the goal of increasing tax revenue. As a result, they siphon about 12 percent of the state’s property taxes into this mad world of corporate subsidies and property-right abuses – at the expense of traditional services such as education and firefighting.


These agencies should be eliminated. Yet, Prop. 22 would make redevelopment funds sacrosanct. The initiative could end up creating pressure for tax increases for this simple reason: Prop. 22 protects many unnecessary budget items, while leaving more necessary programs fighting for their share of a shrinking budget. That will result in legislators saying, “We have no choice but to call for tax increases.” Returning redevelopment’s ill-gotten gains to the general fund, by contrast, will ease budget pressure and reduce (however slightly) the push for tax hikes.


These sorts of measures are, of course, ballot-box budgeting at its worst. Special interests go to the electorate and lock in their pet funding sources, which then leaves even fewer pools of cash for the Legislature to manage. Granted, no one would argue that the California Legislature can be trusted with budgeting, or anything else of importance, but these initiatives – think about Prop. 98, which earmarks 40 percent of the state’s general fund budget for K-14 education – make it impossible to reform public spending.


Nevertheless, some Republicans are backing this League of Cities atrocity. I understand, as one Republican explained it, that many local GOP officials are tired of having the state raid their transportation funds. And I understand their argument that local – the government closest to the people – tends to be more accountable than government in Sacramento.


But as someone who has for years covered local government, I can guarantee that those governments can rival Sacramento for waste and abuse. Remember that redevelopment agencies are not local agencies. Legally, they are state agencies, although they are managed by local officials. If Prop. 22 passes, these agencies will get protection from state “raids” on their finances, which makes them largely unaccountable: the locals can’t control their abuses because they are state agencies, and the state can’t grab their money because they are local agencies. They apparently want it both ways.


I do agree that the state and locals need to fund more transportation projects, but the answer isn’t to make yet another portion of the budget off-limits to the Legislature. At some point, legislators are going to have to learn that government cannot expand endlessly, that the public-sector pit bulls need to be put on a tight leash and that they have to spend more time managing the state budget rather than promoting the latest social-engineering fads and spending schemes. That’s unlikely to happen any time soon, so it’s natural to look to the initiative process for a solution. Unfortunately, this special-interest measure will only exacerbate the mess.

The California Subdivision Map Act - A One Day Seminar


WHAT IS COVERED?
This seminar provides guidelines for effective use of the Subdivision Map Act. The instructors will discuss the responsibilities and powers of local agencies under the Act, as well as particular issues regarding when the Act applies.


Seminar highlights:
•Discussion of Legislative and Judicial changes in 2009
•Relationship of Map Act to other planning, zoning and development laws, and to CEQA
•When the Map Act applies (and when not)
•What kind of Map (Tentative/Final or Parcel Map) to use
•Certificates of Compliance
•Lot Line Adjustments
•Exemptions and exceptions under the Map Act
•Life of Tentative Map
•Vested Rights (including Vesting Maps, Development Agreements and Common Law Vesting)
•Exactions/Dedications/Fees
•Creative mapping approaches

WHO SHOULD ATTEND?
This seminar is designed for planners, surveyors, engineers, developers, builders, attorneys, project managers, architects, planning commissioners, council and board members, property managers, public works and utilities directors, zoning board members, and all others involved with the land use process.


This course qualifies for 6.0 hours of California MCLE credit.