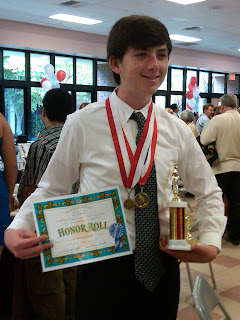 Today my son is graduating from the 8th grade.

Back when I left the 8th grade at Ladera Vista, I was surprised that their was even a ceremony for the class because I didn't see 8th grade as any particular milestone.  Years later I discovered that schools had kindergarten graduations and some even have daycare graduations out of preschool!


As lame as I thought all of those were, I am proud that my son is graduating from St. Angela Merici School in Brea.  After three years at St. Angela's, Wyatt has grown to enjoy history, English, literature, science, and many other subjects.  He has landed on the Honor Roll and received several accolades for his service to the school and church.
Wyatt has made many new friends, several of which will be attending Troy High School with him this Fall.  He discovered new passions, like music and technology, that has consumed him.  He played volleyball and football.  He was even the DJ at the annual Family Day. 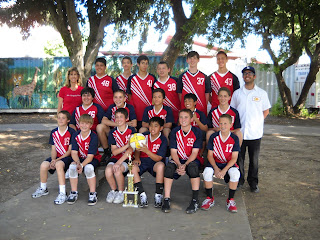 There were many times my wife and I were sent to our knees praying for him.  Even his class, the school, and all the parish prayed for him.  Despite breaking his arm and enduring surgery as well as the fears that a child experiences in those dark moments, he listened to the doctors (THANK YOU CHOC!) and was back wrestling and playing volleyball quickly (THANK YOU GOD!).
The parents and children of St. Angela Merici School are truly one family and we are so very fortunate to be a part of that family.  And to think we almost missed out...
My wife and I decided to pull him out of the Fullerton School District, as my sister had done with her son, to avoid Ladera Vista Junior High School.  Actually, my wife wasn't so sure that it would be good for him to leave his friends and the familiarity of the neighborhood school for a small catholic school.  After much research on Ladera Vista and St. Angela Merici School, I was convinced it was the right thing to do. 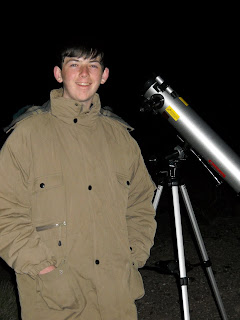 Wyatt is such an amazing and inspirational young man.  Throughout the last three years at St Angela Merici School he learned, asked questions, and learned more.  He studied hard.  Every day he would come home and take a 15 minute decompression break.  Then he would hit the books and only stop for dinner with the family.  He would then return to his studies and work until he was done, whenever that might be.
Once the homework and studying are done, Wyatt hits the weights and begins his workout.  He wants to wrestle and he wants to win so he pushes himself above and beyond.
I expect him to continue this same regiment and work-ethic and for his success to flourish.
In the midst of studying and working out he his kind and loving to his sisters.  He chases them and they chase him.  They all scream and tackle one another.  He shares his old toys and plays video games with them.

And then when something bad in the world happens, he looks to see what he can do to help those in need.

I am blessed to have a son who takes responsibility for his learning seriously and is such a kind person.

Wyatt doesn't need it but I still wish him good luck at Troy!

Family Action PAC Urges Orange County GOP Legislators to Abandon Defense of Redevelopment Agencies
Political organization calls support for RDAs an affront to conservative principles
For Immediate Release
Orange County, CA (June, 2011) – Today, the California Alliance to Protect Private Property Rights announced that a prominent conservative Orange County political action committee has joined a coalition of taxpayer and private property rights organizations in calling for the abolition of California redevelopment agencies (RDA).
RDAs have come under considerable public scrutiny for wasteful government spending, eminent domain abuse and, according to independent state analysis, failing to increase the overall number of California jobs. In March, only one Republican legislator, Orange County Assemblyman Chris Norby, joined Democrats in supporting Governor Jerry Brown’s plan to abolish redevelopment agencies. Failing to generate one more Republican vote, taxpayer funding of RDAs continue.
Several Orange County Republican legislators that have been critical of redevelopment agencies in the past, now defend their very existence.
“GOP support for redevelopment agencies is an affront to conservative values,” said Family Action PAC chairman Larry Smith.  “During these tough economic times, providing taxpayer funding for private development, sports arenas and luxury golf courses is not a good use of taxpayer dollars.  It has hard to believe that Republicans are standing in the way of reform.”
In addition to diverting over $5 billion in tax increment revenue annually without any reliable evidence that they create new jobs, a California’s State Controller audit of RDAs concluded that overly broad definitions of “blight” expose private property to eminent domain abuse and invite wasteful spending of tax dollars on dubious redevelopment projects such as luxury golf courses.  In addition, redevelopment funds were inappropriately used to supplement the general funds of local governments.
The Family Action PAC was formed in 2000 to focus on business, family, and social issues.  The PAC supports initiatives and local and state candidates that will affect Orange County and California, and has served a critical role in the outcome of Republican primaries in Orange County.
The California Alliance to Protect Private Property Rights recently launched a statewide public educationcampaign to build public opposition to RDAs and ask GOP legislators to sign a pledge to abolish redevelopment agencies. The pledge calls on GOP legislators to renew their commitment to conservative values such as protecting taxpayers and private property.
Californians are encouraged to visit www.stopthemoneypit.com to learn how they can join our campaign to protect private property rights, eliminate government waste, and support legislation that abolishes RDAs, SB 77 and AB 101.
The California Alliance to Protect Private Property Rights is California’s leading private property rights (non-partisan) organization founded in 2005 and was a lead sponsor of Proposition 98, a 2008 state ballot measure that sought to protect private property rights.
Contacts:
Marko Mlikotin, California Alliance to Protect Private Property Rights, 916.552.0335
Larry Smith, Chairman, Family Action PAC, 949.955.1191
www.calpropertyrights.com
by Greg Sebourn on Thursday, June 09, 2011 No comments:

San Clemente water rates going up 12.6%
By FRED SWEGLES
FOR THE ORANGE COUNTY REGISTER
Over protests from a handful of residents, San Clemente's City Council approved a 12.6 percent increase in city water-use rates for homes and businesses Tuesday, along with a 6 percent rise in sewer rates.

As it stands, Fullerton water customers are looking at a 6% per year increase in water rates for each of the next 5 years (2012-2016), then a 3% increase for each of the subsequent 5 years (2016-2021).  Also being increased by 1.8% is the "pass-through" cost to cover the pumping tax Fullerton pays to the Orange County Water District.  The pass-through costs can change at any time and without vetting through the same process that the water rate increases must go through.
by Greg Sebourn on Wednesday, June 08, 2011 No comments: 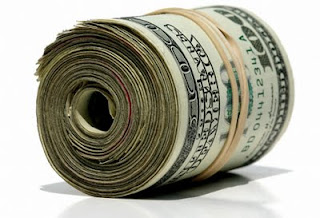 The City of Fullerton's Proposed Budget is out and tonight your elected Council will vote to approve it.

$172.6-million represents the "total appropriations" planned for FY2011-12 for the City of Fullerton and the balance, $20.4-million, is what the Redevelopment Agency plans to spend for the same period.

The biennial budget also includes a rough budget for FY20120-13 with $183.2-million in projected additional spending.

If the City had the money to spend, I could see a favorable vote by Council members, however, the 2-year budget falls $8-million short of being balanced.

Unfortunately, this budget is based on the premise that city employees will negotiate and accept a cut in benefits in order to help balance the revenue short-fall or over-extended expenditures depending on your point of view.

With only 3% of our budget being invested in our streets and water system its no wonder our water rates will be going up.
by Greg Sebourn on Tuesday, June 07, 2011 No comments: